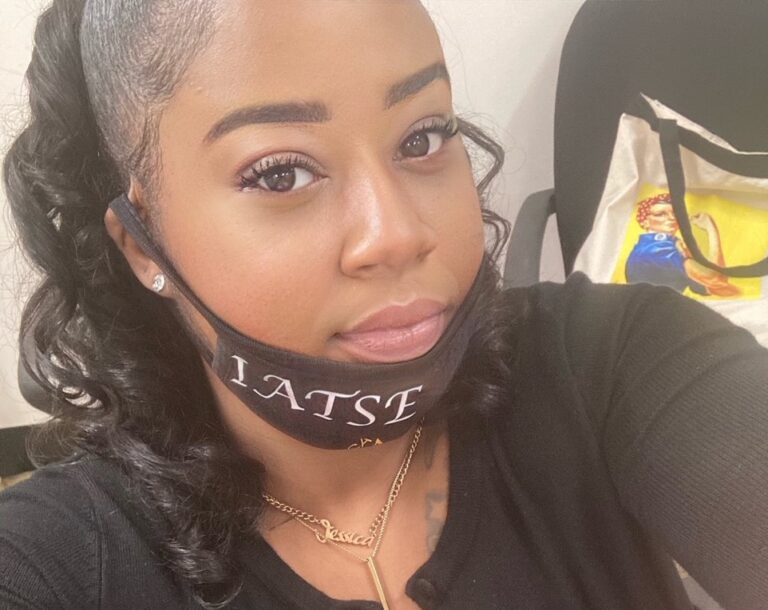 In June 2020, Local 834 Vice President, Stagehand and Rigger, Jessica Gavin sat with IATSE’s Communications Department to share her experience as a Rigger in the exhibition industry and discuss diversity, activism, and unity within her Local.

Six months later, now more than ever Gavin is still using her platform to amplify the voices of entertainment workers and members of her Local.

As a pillar in her community, Gavin acts as the Political Coordinator for Local 834, a member of IATSE’s Young Workers Committee (YWC) and sits as a Member-At-Large on IATSE’S newly formed Diversity, Equity, and Inclusion (DEI) executive committee.

“Currently my focus has been being politically active in my community to help turn Georgia blue with the Senate,” Gavin says. “During this time, my Local also created an emergency response committee to ensure our members get all the help they need, whether it be for financial or food assistance. As of today, we have helped over 250 Local 834 kin.”

As if that weren’t enough, Gavin would soon use her platform again to represent and empower her fellow IATSE Sisters, Brothers and Kin, this time on a bigger scale.

On December 2, 2020, Gavin was invited to speak to President-elect Joe Biden in a virtual roundtable panel to discuss the concerns of IATSE members, COVID-19’s impact on the economy and entertainment workers.

“I’m usually nervous but this time I wasn’t at all. I was confident about speaking to someone who can help us and get the attention entertainment workers need,” said Gavin. “We are facing so many troubling days. We all have been reaching out to senators, governors, and lawmakers every day, so it was humbling to speak on our behalf. I hope speaking up will bring some type of aid to the workers in our industry.” 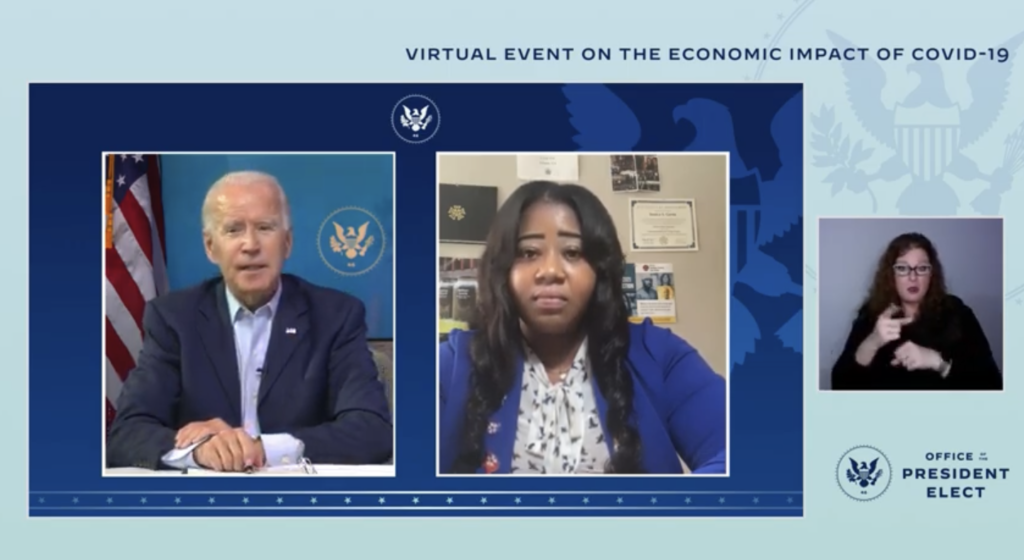 When speaking to President-elect Joe Biden, Gavin expressed the immense impact COVID-19 has had on IATSE members and urged President-elect Biden and his administration to pass some relief for entertainment workers.

“We were the first to be laid off and will probably be the last to go back. Entertainment workers right now are being put on the back burner. We are basically on a limb here. We’ve tried everything, we’re doing as much as we can. We need help, we need a lot of help.”

Gavin says as a young woman of color, this moment, and the opportunity to speak to President-elect Joe Biden on behalf of her union family was unbelievable.

“Knowing that Kamala Harris will be the first female Vice President and to speak to the President-elect Joe Biden, being a young woman of color, it was literally unexplainable,” she added.

“It’s an honor. I am a triple minority. No one where I am from, is involved in politics so to have that opportunity, I still can’t believe it.”

Gavin says since the panel discussion with President-elect Joe Biden, many heavy hitters in Entertainment and Journalism have reached out to applaud her for speaking out and amplifying the voices of entertainment workers. Gavin says she has also received an outpouring of love and support from her IATSE Sisters and Brothers everywhere.

“It feels amazing. It’s heartwarming to know that I can speak on the issues we are facing as an industry. What we do as entertainment workers, is what is healing our country during the pandemic,” Gavin added.

“Everyone is watching TV during this time, but no one takes the time to reflect on the people who put the shows together.” 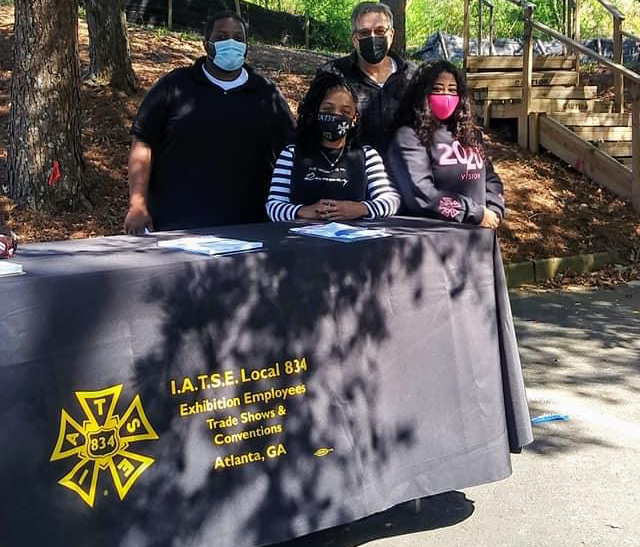 Gavin says she credits her positions as Local 834’s Vice President and a member of IATSE’s YWC and DEI committee for part of the reason she is so active and advocates for the issues in her community and IATSE members.

I have a lot of people counting on me in my Local and family. I now have the outreach and avenues to help myself and my community. I’m surrounded by like-minded organizers and I have the support of organized labor.” she expressed.

Gavin says she will continue to fight for frontline workers and will not stop until she brings the entertainment industry back.

“I can’t focus on anything until I bring our industry back even if I have to do it alone, I have to bring the whole IATSE back,” she says.

“In ten years, I plan to run for Congress as a labor candidate. I want to speak for working people and continue to be on the forefront of the labor side for IATSE.” 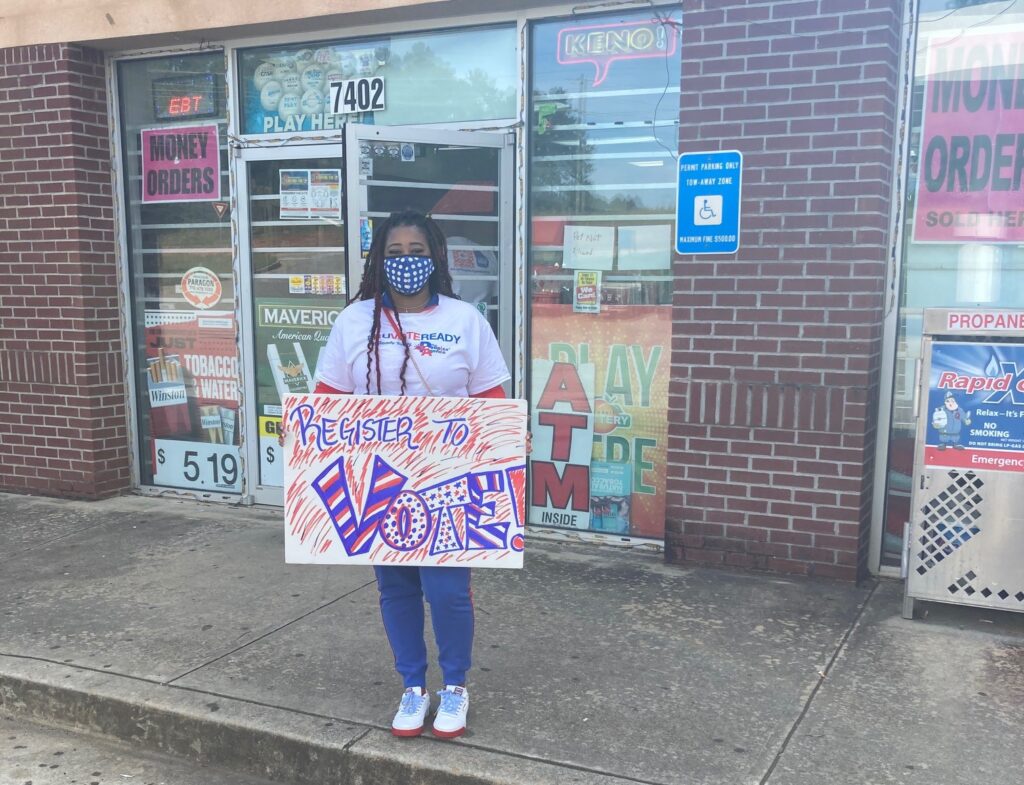